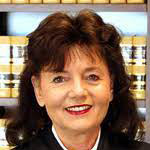 Justice Eileen Moore was appointed to the Superior Court of California, County of Orange, in 1989 and to the Fourth District Court of Appeal in 2000. For the last 28 years Justice Moore has been an author for the Thomson West Civil Practice texts on Procedure. She has also served as author of the Litigation Update for the California Lawyers Association’s Litigation Section for the last 12 years.

Prior to her appointment, Justice Moore built a legal career in private practice in Newport Beach. She also practiced as a registered nurse, including service as a combat nurse with the Army Nurse Corps in Vietnam. She is a life member of Vietnam Veterans of America.

Justice Moore has been presented with many awards and honors by courts, legal organizations, and civic and educational groups, including the California Judges Association’s Humanitarian Award. In 2020, the California Department of Veterans Affairs presented Justice Moore with a trailblazer award, and in 2021, the United States Department of Veterans Affairs presented her with a trailblazer award. In 2022, the Daughters of the American Revolution also honored her.