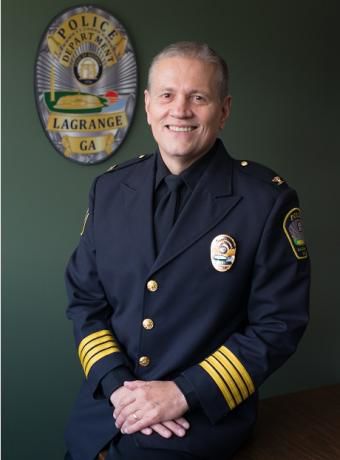 Louis Dekmar's career in civilian law enforcement spans more than four decades and includes 29 years as a police chief or chief of public safety. He currently serves as Chief of Police for the City of LaGrange, GA, where he has instituted significant personnel, operational, and service-related initiatives that have improved training and educational curriculum and expanded community and problem-solving policing programs. Under his leadership, the LaGrange Police Department has reduced liability and crime rates and increased citizen confidence and community partnerships.

Dekmar began his policing career as an officer in Douglas, WY, in 1978. Between 1987 and 1995, he served as an officer, captain or police chief in the Georgia cities of Macon, Perry, and Morrow, where he also served as acting city manager. Dekmar's career  includes service as an investigator for the Converse County and Prosecuting Attorney's Office in Wyoming and as a Civil Rights Monitor for the United States Department of Justice, Civil Rights Division. He has held adjunct professor positions at multiple colleges and universities, and is frequently sought for expert commentary on policing issues by major media outlets.

As police chief in two different jurisdictions, Dekmar implemented the Community Oriented Policing philosophy, resulting in numerous partnerships with nonprofit organizations, faith-based services, and other government agencies. He also created a caseworker position within the police department to address high-risk populations and make effective referrals to partner agencies, and he developed accountability crime fighting models based on data analysis, both for traditional and gang-related crime.

Dekmar has been a member and held leadership positions in many law enforcement associations, including the National Organization of Black Law Enforcement Executives, the FBI National Academy Associates, and the Georgia Association of Chiefs of Police. He served for 10 years, including five as chair, on the Commission on Accreditation for Law Enforcement Agencies, and is past-President of the International Association of Chiefs of Police, representing more than 31,000 police executives and professionals in 152 nations. Dekmar holds a Master of Public Administration from Georgia College and State University and a Bachelor of Science from the University of Wyoming.