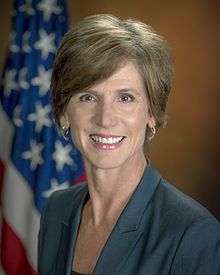 As the second-highest ranking official at the U.S. Department of Justice (DOJ) and as Acting Attorney General, Sally was responsible for all of DOJ’s 113,000 employees including all prosecutorial, litigating, and national security components. She also was responsible for all U.S. Attorney’s offices and law enforcement agencies and the Bureau of Prisons.  Sally oversaw DOJ’s most significant matters and was instrumental in setting DOJ’s enforcement priorities and initiatives.

Prior to becoming Deputy Attorney General, Sally was the first woman to serve as U.S. Attorney for the Northern District of Georgia. During her five years as the chief federal law enforcement official for the district, she oversaw the prosecution of all federal crimes and the litigation of civil matters and immediately became a leader in the Department as Vice Chair of the Attorney General’s Advisory Committee (AGAC), which guides DOJ’s strategies and policy decisions. She has tried numerous white collar and public corruption cases, and she was the lead prosecutor of Olympic bomber Eric Rudolph. Before entering government service, Sally practiced as a civil litigation associate at King & Spalding. She has served as a Visiting Distinguished Lecturer at Georgetown University Law Center, currently co-chairs the Board of Trustees of the non-partisan Council on Criminal Justice and is a member of the Board of Directors of the Ethics Research Center. Sally is a frequent speaker on a variety of public policy issues.